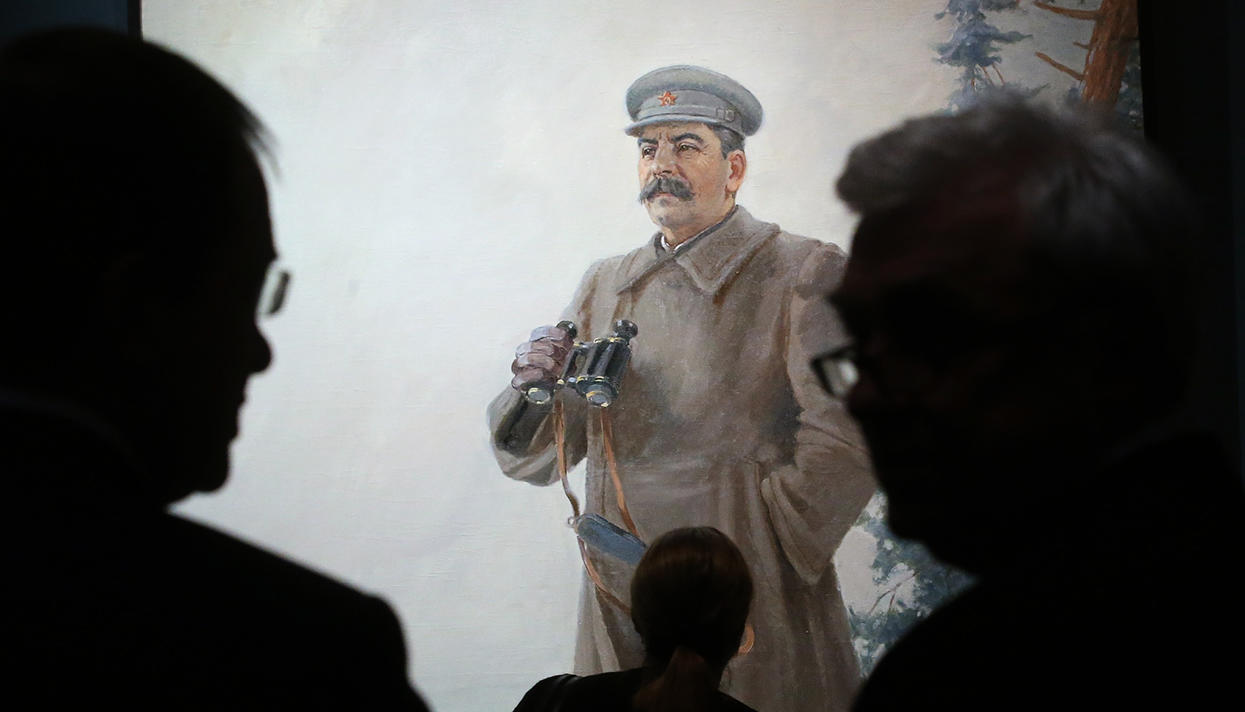 Moscow's State Historical Museum debuted a new exhibit on February 10 dedicated to the work of Alexander Gerasimov, who served as one of Stalin's chief artists. From the mid-1930s until the Red Tsar's death, Gerasimov painted dozens of portraits of Stalin, and produced canonical images of Lenin and other Soviet leaders. Reproductions of his works were printed millions of times over, popping up on textbook covers, hanging in schools, and adorning recreation centers. The Gerasimov exhibit is the third show dedicated to socialist realism sponsored by Russia's Ministry of Culture in the past six months. Meduza special correspondent Ilya Azar attended the exhibit's opening ceremony, speaking to museum officials, as well as Russia's minister of culture, Vladimir Medinsky.

“This exhibit has nothing to do with Stalin, except that Stalin, like Lenin, is depicted in several of the paintings,” Alexei Levykin, the director of the State Historical Museum, insists. He says the purpose of the current exhibit—the first one featuring Gerasimov's work since he died in 1963—is to ask whether the artist served Stalin, or found his own calling and blossomed under Stalin's political protection.

“I'd choose the second [interpretation]: his art wasn't sycophancy!” one person in our guided tour group answered eagerly, before even viewing the whole exhibit.

“The Anthem to October,” 1942. Sketch for the eponymous film, relases the same year. Oil on canvas.
Photo: State Historical Museum

The sponsor and curator of the exhibit is Leonid Shishkin, who has the air of a man whose goal in life is to lead journalists around at an art museum. He believes the real creator and conductor of Soviet reality was Stalin, while Gerasimov could only sense Stalin's vision. 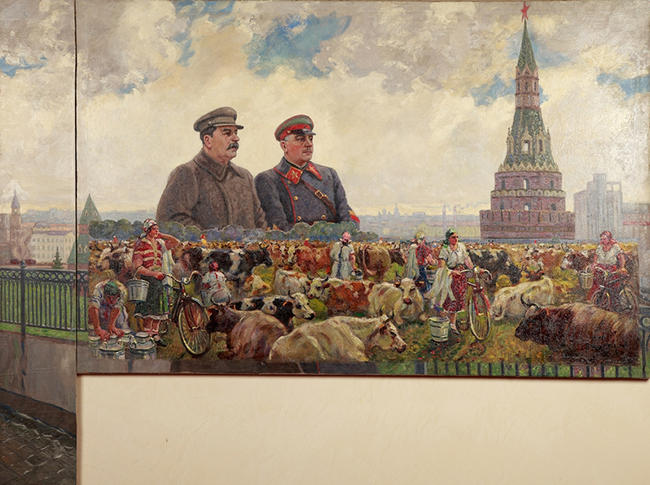 A herd on a collective farm, 1959. Oil on canvas.
Photo: State Historical Museum

“Gerasimov had a unique destiny and biography,” Shishkin says admiringly. “At 22, he was a cattle-dealer, buying and selling cattle—in other words, he was a cowboy. Later he changed his life and went into art.” 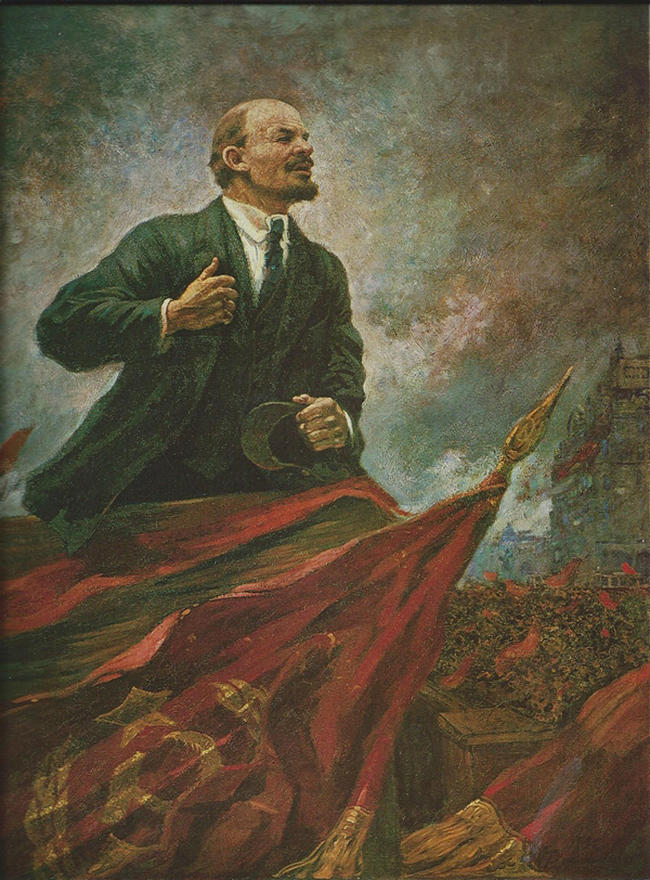 Still-life with a bouquet of roses, 1948. Oil on canvas.
Photo: State Historical Museum

The impressionist echos in Gerasimov's work, however, didn't keep him from initiating the closure of the USSR's Museum of New Western Art. In May 1949, he said work by Salvador Dali and other modern Western artists was full of “ideas of militant imperialism, with its racial hatred, thirst for world domination, cosmopolitanism, zoological antihumanism, rejection of culture, science, and genuine realistic art.” 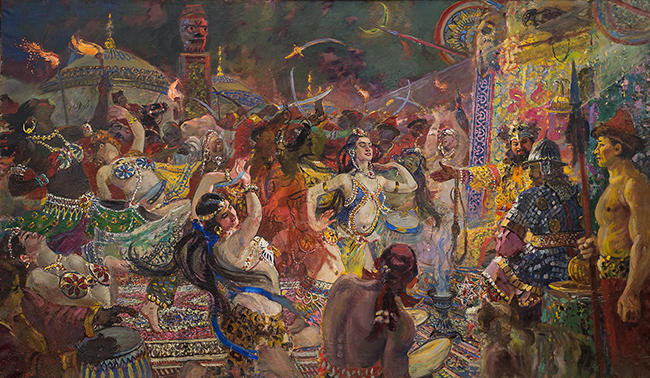 “[Gerasimov] not only created portraits of [Soviet] leaders, but he also showed himself to be quite a talented artist,” museum director Levykin says with certainty. “To this day, schoolchildren write essays about his painting ‘Wet Terrace,’” Shishkin adds. 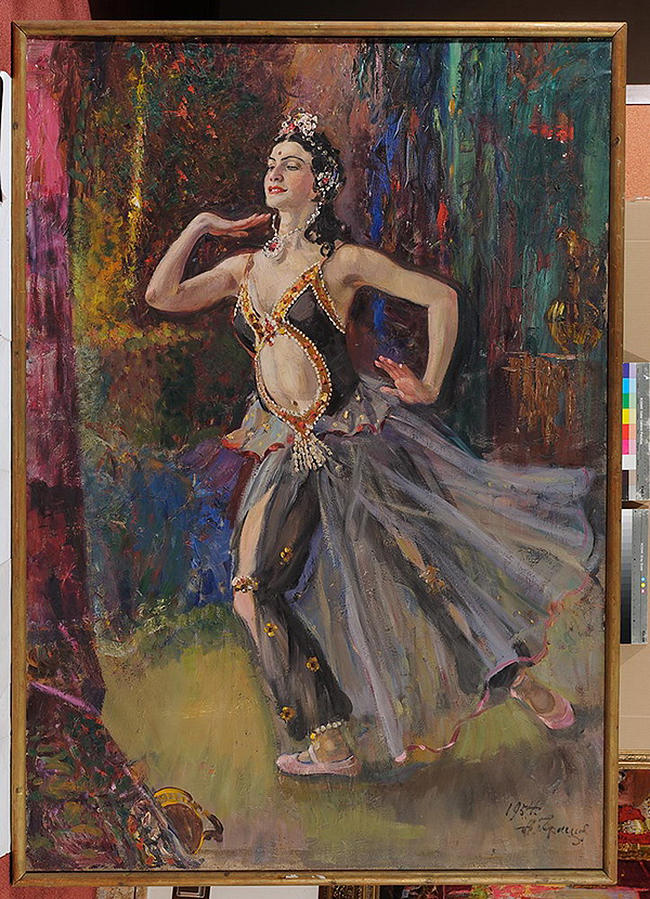 Shishkin also says he understands that many reporters and museum-goers will be interested in Gerasimov precisely because of his connections to Stalinism. “To be honest, I'm afraid they'll say of my exhibit, ‘Oh, there they go again, these old Soviet farts, with the Stalin propaganda.’ But that's not what this is,” Shishkin says. “You've got to understand that, for our grandmothers and grandfathers, this was the country's biggest artist. He was like the television—his paintings weren't intended for museum exhibits, but for reproduction on a mass scale.” 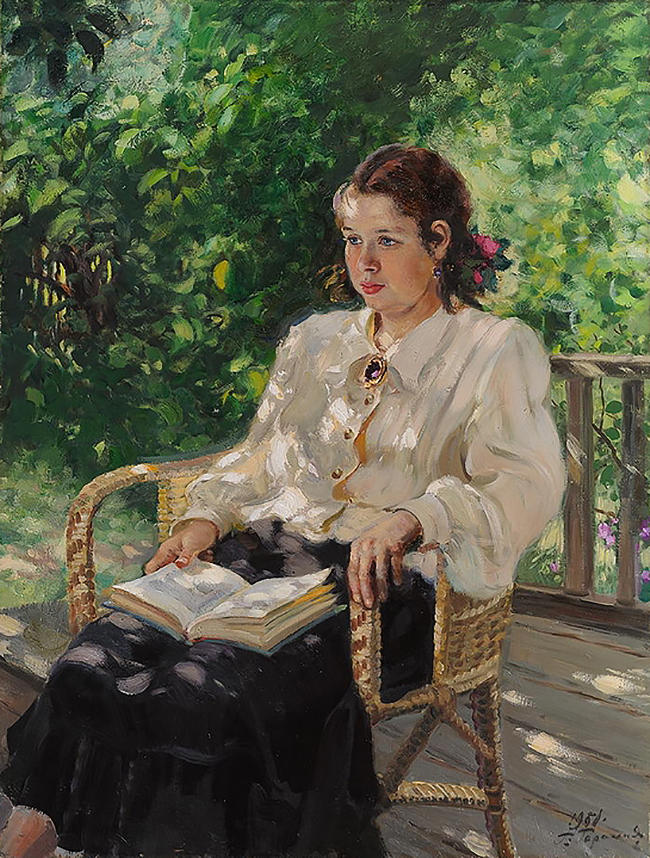 When asked why he included Gerasimov's depictions of Stalin, if he wants to avoid this association, Shishkin answered, “I think you need to show everything, and not say, as if you're talking to children, ‘Don't look over there! This never happened!’ It did happen! And I need to show my son and my grandson how it is, otherwise they'll see for themselves later, and say ‘Oh, how great! Let's do it just like that!’” 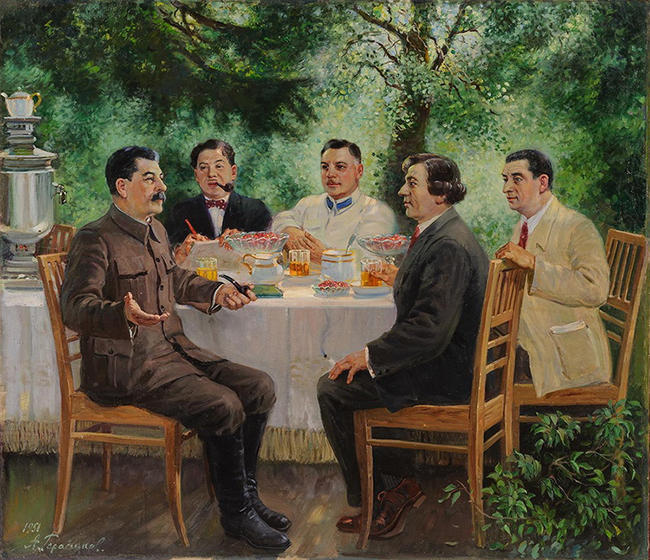 After Stalin's death, Gerasimov was rarely seen again. The new Soviet leader, Nikita Khrushchev, ordered the painter's works removed from all museums and institutes. “They burned all the paintings that were hanging in recreation centers. Gerasimov came to Khrushchev and asked, ‘Why are you burning paintings? What's the meaning of this barbarism? This is art!‘ And Khrushchev told him they didn't need such art,” Shishkin says. 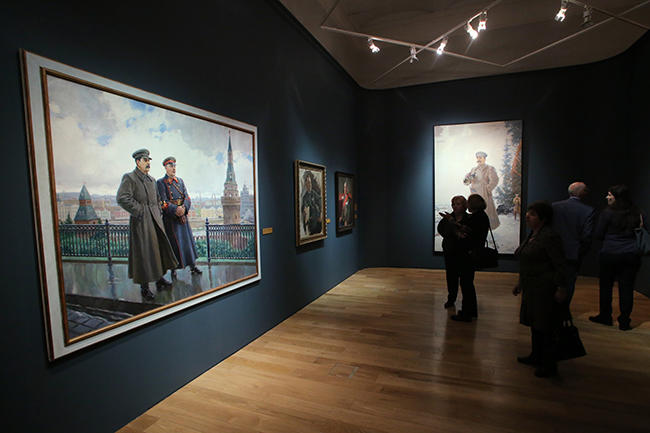 Visitors at the State Historical Museum's Gerasimov exhibit near the painting “Stalin and Voroshilov in the Kremlin.”
Photo: Vitaly Belousov / Sputnik / Scanpix

Russia's minister of culture, Vladimir Medinsky, also attended the opening ceremony. The Gerasimov exhibit is the third show dedicated to socialist realism sponsored by the Ministry of Culture in the past six months. “When you look at these paintings, you understand that we're not just talking about Communist propaganda, but about people who truly believed in what they were depicting—they were trying to make the world better, to perfect it. Perhaps not everything worked out for them, but they had faith, multiplied by a lot of talent, which led to the creation of remarkable works that need to be studied and displayed,” Medinsky said.

And then he turned away, eager to see the exhibit. 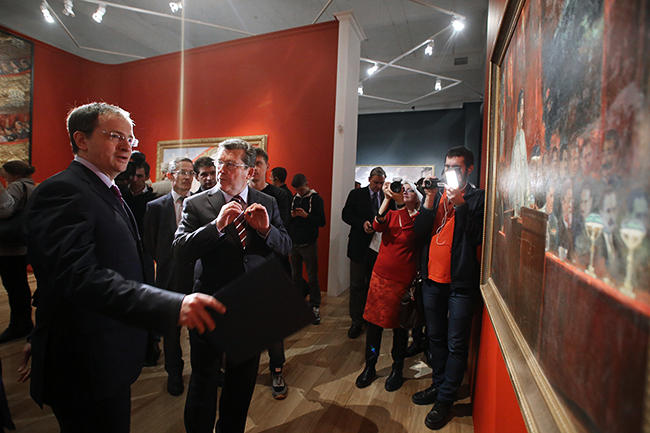 See the Gallery
See the Slideshow

See the latest collections at the UK Gallery.

View all of the upcoming events in the UK and Abroad.